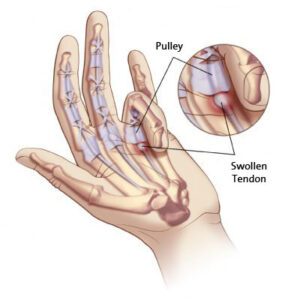 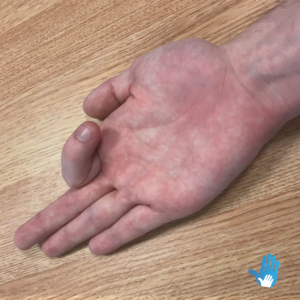 What is Trigger Finger or Trigger Thumb?

Trigger finger is a common and often painful condition that can affect any of the fingers or thumb. It can affect children and adults.

A nodule may develop on the tendon or the sheath may become thickened which can lead to difficulty of tendon gliding in its tunnel known as trigger finger.

The Symptoms and Diagnosis of Trigger Finger

A nodule is often felt on examination at the base of the finger which moves with finger movement.

An ultrasound scan often shows the area of tendon irritation as it moves within its pulley or tunnel if the diagnosis is not clear. There is often some thickening of the pulley and tendon inflammation.

Babies that are affected have a 90% chance of improvement within a year, however if persistent, surgery is advised to avoid long term injury to the joint.

Anti-inflammatory medications and splints can help at early stages of the symptoms.

Steroid injection can improve the symptoms permanently by reducing the inflammation and swelling around the tendon (70% success rate) followed by some hand therapy. Steroid injection can be repeated, however, surgery is advised if there are any complications or if there has been short term improvement following the treatment.

Risks of steroid injection include infection, failure to resolve the symptoms (30%), fat necrosis (the fat under the skin can disappear permanently), skin depigmentation (skin can become permanently white around the site of injection), poor diabetic control for up to 2 weeks.

Surgery is indicated if the finger is in a permanently flexed position or if non-operative treatment has not been successful.

Surgery is performed under local anaesthetic as a day case.  A tourniquet is applied in the upper arm to stop the blood flow to the hand for the duration of the procedure (to reduce the bleeding). A small incision is made on the palm of the hand at the base of the finger (or thumb). While protecting the blood vessels and the nerves the tight tunnel (A1 pulley) is released. This allows the tendon to move freely without triggering. The procedure takes 10 minutes on average. It is a relatively minor procedure taking approximately 10 minutes on average. A bulky dressing is applied to protect the wound.

The hand should be kept dry and clean until the stitches are removed. One week after the procedure the dressing are reduced by the practice nurse and the sutures are removed in the clinic 2 weeks after surgery. Normal daily activities and use of the hand is encouraged immediately after surgery to avoid tendon adhesions.

Driving should be avoided for 2 weeks while the wound is still healing and longer if one is not able to control or manoeuvre the car confidently.

Ladan Hajipour offers all options for Trigger Finger treatment. To find out if we can help you, get in touch today.

How an injured hand/wrist can affect mental health 05 November,2021

The most common hand & wrist injuries in rugby and how to avoid them 22 September,2021